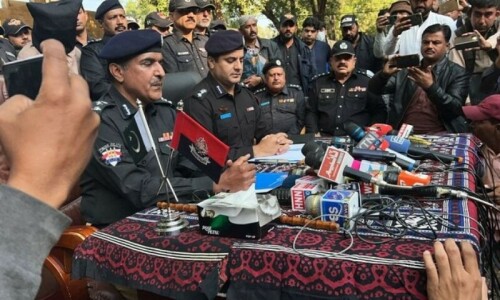 At least four persons were arrested in connection with the coldblooded murder of a Hindu woman in Sindh’s Sanghar district, police said on Saturday.

Forty-year-old widow Daya Bheel was found brutally murdered in a mustard field in the Sinjhoro taluka of Sanghar last week. Her body was found by a watercourse near the fields.

In a press conference on Saturday, Shaheed Benzirabad Deputy Inspector General of Police (DIG) Muhammad Younis Chandio and Sanghar Senior Superintendent of Police (SSP) Bashir Ahmad Brohi informed the media that the police had apprehended four persons in connection with the murder.

The police officers said that Roopo Bheel — a spellcaster — was arrested from his village. A handout issued by the police said that he had confessed to killing the woman with the help of others due to personal enmity.

They said that during interrogation, Roopo told the police that he was a sorcerer and required human organs and skin for casting a spell.

The police officials said that on his plantation they arrested another person named Loonie. They added that the deceased’s brother Dheeraj and her cousin Sajjan were also arrested.

SSP Brohi claimed that the police had visited the place where Roopo had buried the deceased’s skin and other organs, adding that they had found her hair, a knife, and a blade.

The SSP Brohi said the hair was sent for a DNA examination, adding that Roopo had confessed to the police that Daya was first struck with an axe and a knife and then parts of her skin and hair were cut off via a blade.

Meanwhile, DIG Chandio rejected any element of sectarian consideration in her murder, saying that her own community members were found to be involved in the incident.

The police officials said that they did not believe that Roopa had committed the murder only to perform magic, emphasizing that the case was being investigated from different angles and that he had no previous criminal record.

A police handout said that over 100 people were made part of the investigation and DNA samples were taken from 42 people.

The victim’s son had told the press that the incident occurred in Deputy goth near Sinjhoro town, some 20 kilometers from Sanghar.

The police registered a first information report (FIR) on Chand’s complaint at the Sinjhoro police station under Section 302 (Punishment of qatl-i-amd) of the Pakistan Penal Code and sections 6 (terrorism) and 7 (punishment for acts of terrorism) of the Anti-Terrorism Act, 1997.

Somar Chand said he worked as a sugarcane cutter for a landlord in the area and was in the fields the day the murder took place, while his mother and little sister had gone to cut and collect grass.

When he returned home, Chand found his sister crying with no sign of his mother, the FIR stated.

“Upon inquiry, his sister said the two had found a relative of theirs and Daya had asked him to help them carry the grass. On their way back, Daya went to the fields again for another heap of grass but did not return.”

When Chand went to the fields with his relatives to search for his mother, he found her body near a watercourse, the complaint had said.

It added that Daya’s “head was cut with a sharp object, her skin was peeled off from her body [and] breast was cut off”, adding that the gathered relatives informed the police and brought the body to a hospital for an autopsy.