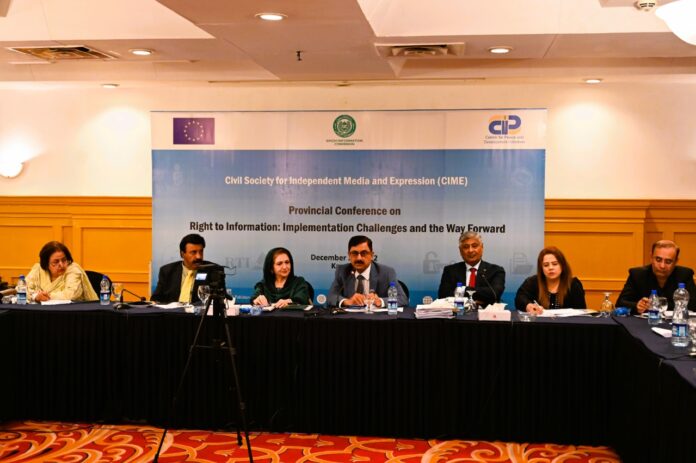 KARACHI:  The Centre for Peace and Development Initiative (CPDI), in collaboration with Sindh Information Commission (SIC), on Thursday held a provincial conference on challenges and way forward of the Right to Information (RTI) at a local hotel in Karachi.
Speakers at a conference demanded the implementation of the right to information (RTI) in the true spirit and discussed the achievements made and challenges confronted by the provincial information commissions.

Special Assistant to Chief Minister Sindh, Senator Syed Waqar Mehdi stressed the importance of reviving print media as it is one of the most credible sources of information. He laid emphasis on imparting information about RTI and information commissions to the students in colleges and universities.

He committed to discussing the linguistic issues in the Sindh RTI legislation with the law department and to arrange a meeting of the RTI advocates with the chief minister of Sindh so that betterments can be made in RTI law for the people. He said it is the will of govt of Sindh to strengthen the Sindh information commission and to ensure that people get access to public information.

Mr. Ali added that the government criticized the Pakistan Tahreek-e-Insaf for not disclosing the information about Tosha Khana; however, despite the court order, the PML-N-led government itself was not willing to the public this information.

Abbas Jafari, MPA Sindh Assembly said that laws are enacted but rules and regulations are not made. He agreed with the speakers that information sharing is resisted by the government and requires passion and commitment to be dug out. He emphasized that RTI has the power to unearth cases like Tosha Khana.

Journalist Azaz Syed emphasized that social and economic progress depends on not only freedom of expression but also on right to information. He said that a secrecy mindset is prevalent across all departments and institutions. He advised the information commissioners to impart RTI training in provincial and federal civil services academies, to parliamentarians, and to those in the local government. He stressed that there is an urgent need to move from a culture of secrecy to a culture of transparency and that without it, there can be no democratic strengthening.

Journalist Syed Ali Shah said that good governance is an answer to all ills of the country. He emphasized that it is important to impart awareness to journalists at the district level so they can create pressure on the government for improved transparency.
Syed Raza Ali, Project Coordinator, CPDI, stressed the importance of Right to Information laws and the challenges faced by the citizen practicing these laws.
He said, despite the legislation, the citizen faces hurdles in getting information from government departments. He maintained that the objective of the conference is to debate the challenges and to collectively discuss their solutions.
Owais Aslam, General Secretary of, the Pakistan Press Foundation (PPF), while addressing the conference said that the right to information is an effective tool to counter fake news. Journalist should change their behavior and should make it routine to file information requests regularly.