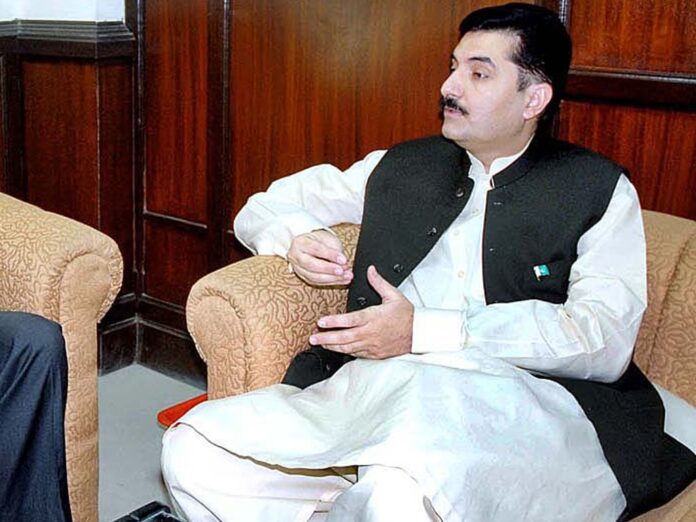 ISLAMABAD: Special Assistant to the Prime Minister on Poverty Alleviation and Social Safety, Faisal Karim Kundi said Imran Khan has once again backed away from his decision of dissolving assemblies and hiding in Lahore.

“Imran Khan had earlier announced to dissolve Punjab and Khyber Pakhtunkhwa assemblies on Friday but once again backed away from his stance”, he said during a presser here Saturday.

Faisal Kundi said that Imran Khan had been declared a certified thief by the institutions for always resorting to lies and deceit.

He said that Pakistan People’s Party would adopt a democratic way to pursue a no-confidence motion against Chief Minister Punjab.

He said that Pakistan People’s Party along with its allied parties succeeded in improving the peace and security situation in the province however those who have been ruling this province for the last ten years have brought us back to the same place.

The SAPM said that the deteriorating law and order situation in Khyber Pakhtunkhwa was the failure of the provincial government and those responsible for this should have resigned from their positions. Today, Khyber Pakhtunkhwa police are on duty at Bani Gala palace and busy in providing security to the thieves and terrorists who are patrons of PTI, leaving their own province, he added and said the KP government has no funds to give salaries to the employees and its Chief Minister is saying that he will protest in the center for the rights of the province. The Chief Minister never demanded any funds from Imran Khan during the last five years just to save his own position, he remarked.

Faisal Kundi also criticized the passage of a bill allowing the Khyber Pakhtunkhwa government servants to use the official helicopters and said that no helicopter was available for shifting the injured from Bannu.

The SAPM criticized Imran Khan for making another false allegation about Bilawal Bhutto for utilizing Rs.

two billion from the Foreign Office on his foreign visits while Bilawal has not taken any funds from the government exchequer for these visits.

To a question, he said that the present government had inherited the economy in a very bad state due to ineffective policies of the PTI-led government.

The present government is striving hard to stabilize the economy. It is a difficult task but we have taken this challenge to put the economy on right track, the SAPM said.

To another question about any intentions to arrest PTI chairman, Faisal Kundi said Pakistan People’s Party does not believe in political victimization like PTI and the government will only arrest him if the court takes a decision against him”.