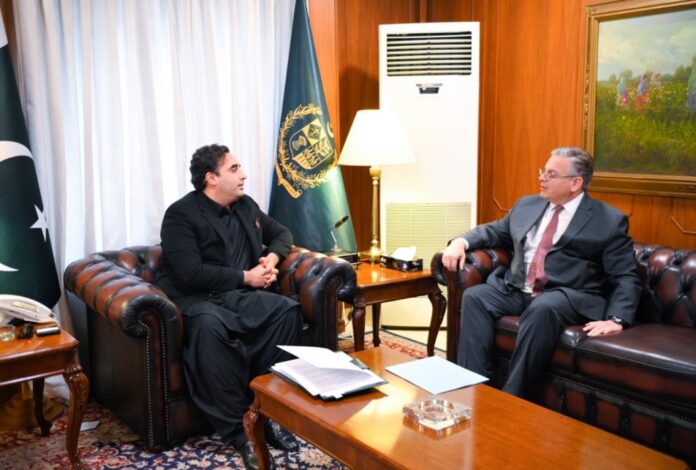 ISLAMABAD: Foreign Minister Bilawal Bhutto Zardari on Thursday said that the facility of interview waivers by the United States for Pakistani nationals across all age groups, who had already held US visas in the past, was extremely helpful.

“This should speed up visa process and will increase people-to-people ties,” the foreign minister said in a meeting with US Ambassador in Islamabad Donald Blome who called on him here.

“Thank you @SecBlinken we have discussed visa issues at length. Allowing interview waivers for those who have already in the past held US visas across all age groups is extremely helpful. This should speed up visa process and will increase people-to-people ties,” the foreign minister wrote on Twitter.

The foreign minister thanked the United States for announcing an additional $100 million at Geneva conference for the reconstruction and rehabilitation of the flood-hit areas of Pakistan.

Foreign Minister Bilawal told the ambassador that he had discussed in detail with the US Secretary of State the visa facilities for Pakistani citizens.

The US ambassador reiterated his country’s resolve to keep extending support to Pakistan for rehabilitation of the flood victims.

According to the US embassy, all Pakistani citizens, regardless of age, whose B1/B2 visas are valid or have expired within the last 48 months are eligible to participate. Previously, only Pakistani citizens of ages 45 and older were eligible to participate. Additionally, interview waiver eligibility for student and petition-based work visa applicants who have previously held a U.S. visa is also extended through 2023.

However, as required by US law, some eligible visa holders may be required to appear at the US embassy or US Consulate General for interviews after submission of their applications.