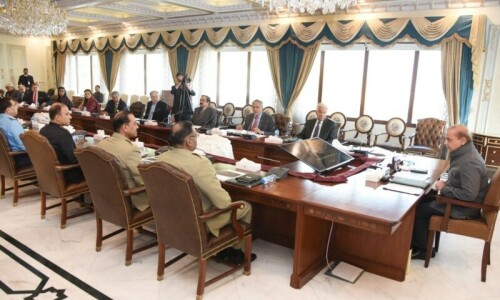 The second round of the National Security Committee (NSC) meeting convened on Monday reiterated its resolve to have “zero tolerance” for terrorism in the country, according to the Prime Minister’s Office (PMO).

The moot — the principal decision-making forum on foreign policy and national security — was attended by senior civilian and military leaders with key matters of security and the economy on the agenda.

A press release issued by the PMO after the meeting’s conclusion said the NSC reaffirmed its determination to take on “any and all entities that resort to violence”, adding that any violence would be dealt with the “full force of the state”.

“Pakistan’s security is uncompromisable and the full writ of the state will be maintained on every inch of Pakistan’s territory,” the press release reads.