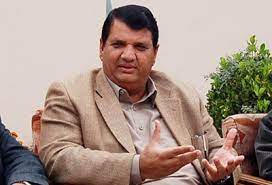 “I am well aware of the problems being faced by the people of Karachi,” he said while addressing a grand meeting in Karachi Kemari through a video link.

He also appealed to the people of Karachi to abandon Imran Khan for being a liar, whose four-year rule has brought nothing but the destruction of the country’s image internationally and his politics based on mere lies such as the provision of two crore jobs and five million houses.

He said starting with the foreign funding case, the watch theft and the dissolution of the Khyber Pakhtunkhwa and Punjab assemblies were all lies.

Engr Amir Muqam said if the people support the true leader of Pakistan Muslim League-N Nawaz Sharif and the symbol of ‘Sher’, whether in the local body election or general election, then the PML-N will not disappoint the public.

He said that he could not attend the meeting directly due to sudden death in the village. The advisor confirmed that he will soon visit Karachi personally.