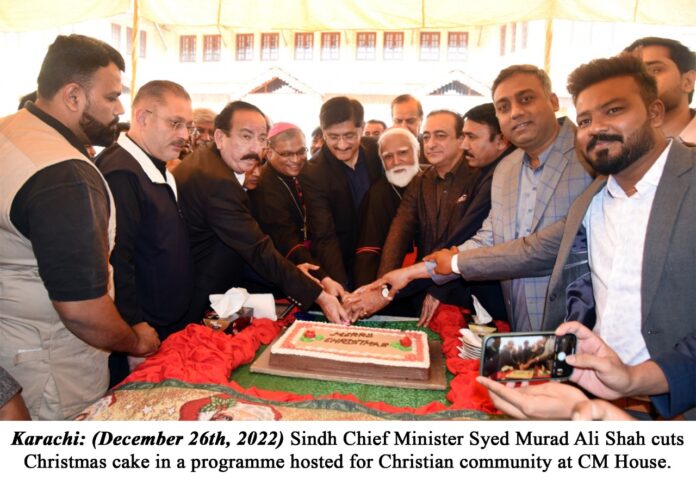 Mr. Shah quoting the father of the nation said “You are free to go to your temples, you are free to go to your mosques or to any other place of worship in this state of Pakistan. You may belong to any religion, caste, or creed that has nothing to do with the business of the State.” He added that this was the manifesto of the Pakistan People’s Party.”

The programme was attended by Provincial ministers, advisors, Special Assistants, MPAs, and PPP office bearers of the Minorities wing of the Karachi division, and of all the districts of the province, Clergy, including Cardinal Joseph Coutts, Bishop Kaleem John, people from Pentecostal Church and notables.

The CM said that the last few years have been difficult for many of us, with the ongoing challenges and uncertainties of the COVID-19 pandemic. “But through it all, we have remained strong and resilient, and have continued to find ways to come together and support one another.,” he said and added we moved forward into the new year, letting us hold onto the hope and joy that the new year would make the world a better place for all.

Murad Shah said that the PPP Chairman, Bilawal Bhutto Zardari, always upheld the rights of minorities. “If any incident happens with any member of the minority community, he starts questioning me and directs me to redress the matter and report him,” he disclosed.

Mr. Shah said that PPP was the only party in the country that took all the religious communities together. “Our one MNA and two MPAs are directly elected in the general elections and there is no such example of any other political party in the country.

The CM said that six of his cabinet members were from religious minorities.“The PPP has never discriminated against any person on the basis of religion, caste, and creed but provides them with equal rights and opportunities,” he said.

The CM extended his heartfelt Christmas greetings to the Christian Community. “May this festive season bring you joy, happiness, and all the blessings you deserve,” he concluded.
Minister for Minorities Gianchand Israni and MPA Lal Chand Ukrani, Cardinal Joseph Coutts, and PPP MPA Naveed Anthony also spoke on the occasion.

Minorities Minister Gianchand said that he was from the Hindu minority, but his party has given him the ministry with the portfolio of Minorities Affairs task to redress the grievances of the minorities on a priority basis. He disclosed that he has been elected MPA directly on the PPP ticket which was a great honour for him.
The CM along with his cabinet members, and Christian community guests cut the Christmas cake.