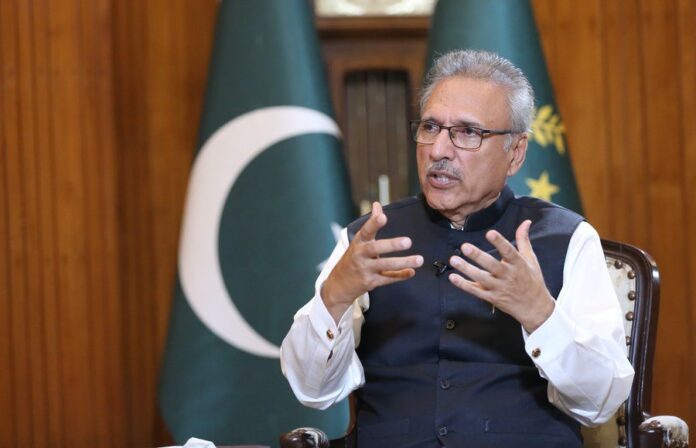 President Dr. Arif Alvi on Monday dismissed a report quoting him as saying that former army chief Gen (retd) Qamar Javed Bajwa had helped the PTI during the 2018 general election and in the Senate, terming it to be out of context and “self-concocted”.

The statement issued by the President’s Secretariat came after News published a report wherein it quoted Alvi telling journalists, leaders of the business community, and foreign diplomats during a dinner on Saturday that “Gen Bajwa and his team” had helped PTI Chairman Imran Khan in the Senate and the elections.

The statement issued today said Alvi had taken notice of the statement “wrongly attributed to him”. “The statement has been quoted out of reference to the context and is twisted and self-concocted,” it added.

According to the report published by News, Dr. Alvi was asked during the gathering about the souring of relations between the PTI chief and Gen Bajwa to which he replied that he was still looking for the answer.

The president said it was probably in October last year and then in April or May this year, the report said.

The president, according to the publication, was also asked whether Imran at any stage thought about sacking the former army chief, to which, he responded: “No, I don’t think so. That was a rumor.”

Dr. Alvi, as per the report, said he had also verbally suggested to both the government and opposition that a middle ground might be found and elections could be held at the end of April or in May.

It is pertinent to mention that Bajwa and the military were accused of helping the PTI not only come into power but run its affairs. On Sunday, Minister for Economic Affairs Ayaz Sadiq urged Bajwa to reveal his “role” in the 2018 general election in “ensuring” the victory of the PTI.

He claimed that the Grand Demo­cratic Alliance (GDA) representatives said they were under pressure in 2018 to join the PTI.

Last week, Punjab Chief Minister Chaudhry Parvez Elahi, an ally of the PTI, had also reminded “ungrateful” PTI about the “favors” of the ex-COAS upon the party and warned it to keep criticism of the former army chief “within limits”.